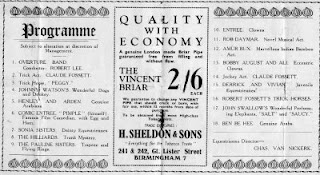 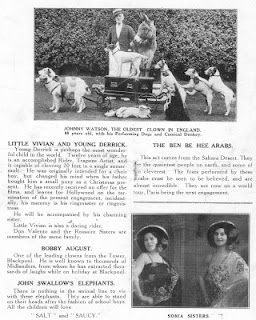 George Pinder has very kindly sent over two scans of a Christmas programme for Bingley Hall's circus 1932-1933. The programme shows listings of the elephants Salt and Sauce. At the time the elephants were owned by John "Broncho Bill" Swallow. He had auctioned off his own circus in 1930 in the wake of the Great Depression. Salt and Sauce had been one of the few items that had not been sold*. They ended up becoming a big part of the business that would sustain him for 15 years before his death in 1945.
Notes:
George Pinder's famous French/English circus family feature a lot in my first book, "The Legend of Salt and Sauce". The Bingley Hall booking is also noted in my timeline appendix.
Bingley Hall has special childhood memories for me, as my parents ran their circus there for the Christmas season of 1982/1983 and 1983/1984. Sadly 1984 would be the year that the building caught fire, damaging it beyond repair. It was owned by the famous yachtsman, T0ny Bullimore, at the time my parents worked there and for years afterwards we still received Christmas cards from him. Bingley Hall replaced Bingley House in 1850.

*Actually there is more to this story than meets the eye as my book reveals.

Posted by Philip Astley at 08:23 No comments: