Ivor Rosaire: Hero of "The Legend of Salt and Sauce" 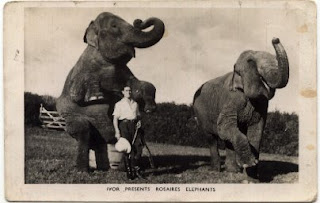 The 24th December 2007 marks the second anniversary of the death of Ivor Rosaire, a legendary figure in the circus world and a key character in my book “The Legend of Salt and Sauce”.

In 2002 I finally made the decision to meet Ivor Rosaire. Ivor was the last living person to have been involved in the presenting and training of Salt and Sauce the elephants, the focus of my book “The Legend of Salt and Sauce”. By all accounts he was an extraordinary individual, even by the standards of his profession and the circus family he was born in to. According to the author, Rupert Croft-Cooke, who spent a great deal of time on the Rosaire’s Circus and wrote three books on the family; Ivor was “the best showman of Rosaire’s Circus. Confident, with a little amiable vanity, as though he is aware that women in the audience consider him a handsome fellow, he yet succeeds in getting everyone’s attention for Salt and Saucy, who move with trundling certainty through their series of tricks. They stand on two legs, squat on their vast haunches, and one of them, to the delight and alarm of the audience, carries Ida round the ring in her mouth. Ivor, in breeches and a sun-helmet, directs them coolly and takes his applause as his two lumbering charges leave the ring”.

My father and I went to visit Ivor when he was still living at Billericay at the Rosaire’s old circus winter quarters, now the permanent home of his niece Joan, a hugely respected horse trainer in her own right. Joan set the meeting up for Dad and me. Dad knew “uncle” Ivor, as did most circus people of his generation. Ivor had always been seen as dynamic figure in the circus world. He was known to be very amiable and with a good sense of humour, but also a straight talker and a tremendous fighter. He and his brothers had boxed in the circus ring since the age of eight, often having to fight each other when no other youngsters came forward for a bout – this would have been in the very early 1920s.

After settling down to tea with Joan, a loud and expressive voice heralded the arrival of Uncle Ivor. My first impression of him was of a man who had lived life to full and, now in his nineties, had no intention of letting anything get in his way. He had recently broken his hip, but this did little to worry him. His walk was confident, even if slippers adorned his feet. He was smartly turned out. “Do you like my shirt?” he asked not long after we exchanged greetings. It was in the cowboy style, a fashion very common with circus artistes throughout the Salt and Sauce era. His long grey hair was pulled back into a ponytail: “I am an old age pensioner”, he proclaimed in defiance, “and they wanted to charge me £9”. After a few jokes and the obligatory teasing that goes on amongst any close-knit culture, we got onto the business of the interview, the full results of which you can read in “The Legend of Salt and Sauce”.

Here is a short excerpt:

“Ivor Rosaire was born on 8th July 1911 in Pontefract, where Rosaire’s Circus was showing. Ivor grew up into a proud, powerfully built, chestnut haired man who seemed as much at home walking into an acrobatic act, stripped to the waist, as he did when immaculately attired in safari style breeches, long boots, shirt and pith helmet. e was never photographed in the circus ring nor on stage without a confident showman’s smile stretched across his face. It was such charisma that made him shine out even among his colourful signally impressive brothers and sisters.

He claimed he was never taught anything in his life. The only person he ever credited for influencing him in any way was Jimmy Fossett, who was the son of the original ‘Sir’ Robert Fossett, the founder of Sir Robert Fossett’s Circus. Ivor claimed Fossett had helped get him over his hesitation in throwing a back somersault off a table”.

Ivor was already an accomplished artiste by the time John “Broncho Bill” Swallow joined Rosaire’s circus as a business partner in 1933. Swallow brought along his two elephants as a major incentive to help the small family circus grow, one of the very few things left over from the weekend he auctioned off his circus in 1930. Before Swallow joined Rosaire’s Circus they had been an almost completely family-run enterprise with members of the family working in nearly every single act. This was the way Rosaire’s circus had formed. The “Count” and his “Countess” had grown their circus from a small sideshow act, appearing in music halls and on fairs into a full family affair, bringing all their children up in their enterprise. They had suffered incredible hardships, losing plenty through the First World War, but had persevered and attracted the attention of two very notable authors, Ruth Manning-Sanders and Rupert Croft-Cooke, both who spent a considerable amount of time living on their show.

Ivor took over the handling of Salt and Sauce when one of John Swallow’s grooms left his employ to start a family – in fact, according to Uncle Ivor, the family had already started ahead of time and the groom had to rush back home and do the decent thing! It wasn’t long before Ivor was presenting the act, as Swallow’s health deteriorated and he lost his main presenter the South African sharpshooter, Charles Van Niekirk. Presenting and eventually training elephants would become Ivor’s niche. He always remembered Salt and Sauce as his favourite elephants, even after the day Salt killed one of her grooms in 1937. Ivor also influenced John Swallow to adopt a new routine for Salt and Sauce to perform: the tableau act. This classy performance involving dancing girls (Ivor’s sisters and later Clara Paulo) had been inspired by an act given by Charles Schmidt at the Agricultural Hall Islington.

Not long after Swallow left Rosaire’s Circus, Ivor joined him on Paulo’s Circus in 1939 and continued presenting the elephants before his papers came in and he was sent to fight in the Second World War. Ivor was made a sergeant and a PT instructor. However, he was to see Salt and Sauce again. After being discharged he worked in a barrel act (an acrobatic number) on his parents’ show before being employed by “Long” Tom Fossett to bring his old friends out of retirement. John Swallow had died in 1945 and his elephants had passed to his son who donated them to Dudley Zoo. For a year they had stayed at the zoo, where no-one had been able to handle them and legends amount their infamy had spread. Then Tom Fossett had decided to bring them back out on the road again. He bought them from Dudley Zoo and Ivor Rosaire was brought in take them back through their old routines. It was a successful move and Ivor presented them on Fossett’s Ringland’s Circus before Tom Fossett’s son, Dennis took over.

From the postscript of “The Legend of Salt and Sauce”:

“[Ivor] went back to work with his sister Zena again in 1948 as a barrel jumper in the act “Jumping Ross and Partner”. He also became a part of the aerial act, “The Flying Desmonds” that same year. His skills as an elephant trainer were required again when Chipperfield’s Circus booked him that Christmas at Bingley Hall in Birmingham. He took the group on the continent for the next three years and worked with Chipperfields in England until 1954. During his time there he worked an act of sixteen elephants and also, at one time, a group of five bull elephants. In 1957 he was back working for another branch of the Fossett family presenting five elephants. Their show was known as ‘Sir Robert Fossett’s Circus’. He worked there until 1965.

This act became one of Britain’s most famous elephant acts and Ivor one of Europe’s most celebrated elephant presenters. Knowsley Safari Park called upon his skills and knowledge in elephant care some years later. He eventually retired to Billericay, Essex when his wife, Lucy, became ill. He celebrated his ninetieth birthday in 2001. He won the Circus Friends Association Lifetime Achievement Award that very same year. In 2003 he was interviewed at the Circus Friends Association’s annual general meeting, where he gave a talk in front of a packed house on his experiences with elephants.

He later broke his hip and moved to live in a nursing home close to his daughter, Juliet, in South Harrow. Despite suffering a few health problems, Ivor continued to be a stubbornly independent and a hugely respected man in the circus industry. He eventually died on Christmas Eve 2005”.

I feel very privileged to have met Ivor Rosaire. He was the only person I have seen who corrected my father – “shoulders back!” was his remark to Dad just before we went to leave Billericay. Dad laughed and agreed he needed to work on his posture. A year later I would feel like a bodyguard to “Uncle” Ivor at the Circus Friends Association AGM. We had our only photograph taken together, where I too sported a ponytail – it was purely a coincidence (the hairstyle was a leftover from when I presented my Gothic martial arts act), but it felt like a type of tribute to this heroic figure in the circus world. Looking at the lawn outside the venue where the photograph was taken, on a sunny day, Ivor remarked “a few years ago and I’d have thrown a roundoff/flipflap/back somersault over there”. It was a sweet reminiscence, but I never felt that Ivor neglected the present. At the time of the interview Ivor had already been training his granddaughter tumbling and a year previously he had visited his brother Derrick in America. Ivor Rosaire was an example to us all, a man who exemplified Timothy Leary’s “correspondence theory”: he lived for the present, eyes towards the future, but with a firm grasp on his past.
Posted by Philip Astley at 08:26 12 comments: Links to this post