We Went to the Zoo Today 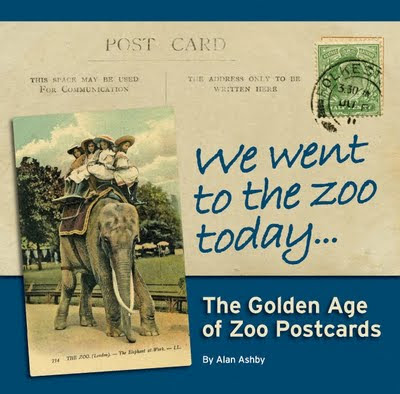 I am delighted to announce the release of Alan Ashby's new book on historical zoo postcards "We We Went to the Zoo Today... The Golden Age of Zoo Postcards". This book is a wonderful illustration of the bygone years of the zoo - both good and bad- in the UK. From an historian's point of view it helps to bring to life a time that seems so far removed from today.

However, the production of this book is its main appeal. Alan has taken great care in the way he wanted to present this old and often rare postcards. They are shown "warts 'n all" if you like, including fraying around the edges and other imperfections, which is as good an analogy for the right way history should be presented!

In the early 20th century just as now, a day at the zoo was a break from routine, an enjoyable diversion. However, the passage of time has gradually revealed some fascinating and marked differences between then and now. The postcards in this new book often show a politically incorrect world where giving a lighted cigarette to a chimpanzee was not considered out of the ordinary, where enticing a bear to climb a pole to earn a tid-bit or riding on just about any animal that would tolerate it, was the norm, all part of the fun. 'We Went To The Zoo Today...' takes a close look at this world. The postcards featured would almost certainly be impossible to duplicate as a collection of originals and, even if that were not true, it would take years of searching and many hundreds of pounds, to gather a comparable set. Look at the curious zeedonk on page 78, the famous elephant trainer, Lorenzo Lawrence, on page 48 or the boxing kangaroo on page 38. All are now scarce, and most of the zoos shown are now long closed and some virtually forgotten. 'We Went To The Zoo Today...' contains almost two hundred of the best postcards of their kind. They are often amusing, sometimes poignant, but always of interest. This book endeavours, and hopefully succeeds, to give these �silent snapshots� the voice they deserve. This book includes a History of the Picture Postcard and helpful tips on how to date postcards. Zoos featured are: London; Dublin, Belle Vue; Bristol; Rosherville; Blackpool Tower; Southport; Alexandra Palace; Stoke-Sub-Hamdon; Halifax; Maidstone; Edinburgh; Paignton; Grimsby; Whipsnade; Chester; Oxford; Chessington; Liverpool; Dudley; Wellingborough and Travelling Menageries.

Posted by Philip Astley at 07:48 No comments: Links to this post